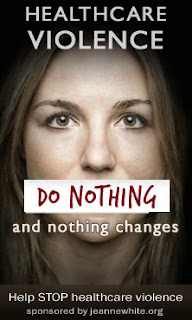 In the 3/26/16 Boston Herald, Lindsay Kalter reported that Brigham and Woman’s nurses may strike over the lack of security in their hospital.

I say HOORAY for them.

This is what needs to happen.

The Herald describes how, according to Trish Powers, a Brigham and Women’s Hospital trauma unit RN and chairwoman of the Massachusetts Nurses Association, “the lack of security leaves staff members vulnerable to random attacks, and that nurses have been beaten and threatened with weapons. One nurse had a 10inch hunting knife held to her throat.”

Brigham and Women’s Hospital is not the only hospital to have their nursing staff/healthcare staff beaten or threatened. It is everywhere.

I applaud the nurses and their union MNA for speaking out, for yelling out. The message is clear.

If you won't protect us we will strike until you do!

Email ThisBlogThis!Share to TwitterShare to FacebookShare to Pinterest
Labels: support

You Just Can’t Make This Up

No Loss of Taxpayer Funds for Hospital?

According to the article, the Massachusetts Department of Public Health issued a letter on 3/8/16 to Dr. Thomas Hickey, CEO of the 120-bed psych facility. The state health agency letter cited failures to meet “standards for patient safety and the administration of drugs,” and that failure to respond within 10 days would jeopardize the hospital’s provider agreement for accepting Medicare and Medicaid – taxpayer-funded health insurance

It’s important to understand: The State agency indicated that Pembroke Hospital’s failure to respond would jeopardize its agreement to accept taxpayer-funded health insurance.

However, according to the Ledger, the State now says its demand was made in error and that the for-profit hospital is NOT at risk of losing Medicare and Medicaid payments, which account for more than 75 percent of its revenue.

On March 24, 2016 I attended WBZ’s Business Breakfast, where the topic was Safety at Work – Maintaining a Safe and Secure Workplace.

At the venue I met Boston Police Commissioner William Evans. We spoke briefly about the healthcare violence and House Bill #1164 that has been sent to study. The other speakers were former Police Commissioner Ed Davis, Lexington School Superintendent Dr. Mary Czajkowski, FBI Special Agent Harold Shaw, all of whom were interviewed by WBZ News anchor Joe Mathieu.
The presenters covered topics such as what to do if in the event of an “active shooter situation;” the use of cameras and video in such situations; and how technology, social media, email and texting has positively assisted their efforts. They described the importance of working with the community by outreach; the training and practice of quick thinking; and reflecting on decisions made and actions taken.

Discussions included what the presenters and their peers need to expect from us and what do we expect from them; building partnerships; and learning about communities while letting the communities learn about them.

While it would be impossible to capture the entire session in one blog post, I came away highly impressed with the whole program.

It was such a privilege to speak to the Police Commissioner, and listen to the other speakers. The work they and others have done and continue to do is outstanding.

To Commissioner Evans, former Commissioner Davis, Superintendent Czajkowski, and Agent Shaw, I extend my sincerest appreciation and gratitude for your work and dedication.

An update to Pembroke Hospital’s wrongdoings has been reported by the Patriot Ledger. The Ledger related that Ms. Judy Merel, Pembroke Hospital spokeswoman, communicated the following in an email statement:

“Once we have received the official report from CMS we will take all steps necessary to remedy any and all issues noted in the report and most likely they will have already be addressed.”

Is it conceivable that the facility’s real impetus for finally taking action is that it is at risk of losing an arrangement of accepting taxpayer-funded health insurance? Is it all about money, and does nothing else matter? Does Ms. Merel even believe the reported crises exist?

I wonder how Ms. Merel would feel if her loved one was in a place like Pembroke Hospital.

While HB 1164 is Sent to Study, Legislative Director Sean Costello Says It will be Refiled Next Session

It is with some dismay that I convey House Bill #1164 has been sent to study. In essence, the Bill has been tabled.

I am disappointed by this development, but I certainly haven’t lost my fight. And Mr. Costello assures me the Bill will be re-filed.

This Bill would prosecute assault on a health care worker as a felony, rather than a misdemeanor as laws are currently written.

The news was communicated to me on 3/16/16 in an email from Legislative Director Sean Costello of Rep. Ayers’ office:


"I just spoke with the committee staffers and they have informed me that the bill has unfortunately been sent to study."

Well what does this mean?

No Changes; and The Violence Continues

After reading and re-reading articles by Chris Burrell of the Quincy, MA, Patriot Ledger chronicling Pembroke Hospital’s security breaches and assaults, I had difficulty grasping the entire scenario:

Documentation appears to support assertions of current and past safety failures: patients being in harm’s way; medical and other staff assaulted; and safety staffing and precautions being sorely deficient.

Yet no action has been taken – save the issuance of delayed hazard alerts.

Alerts to which Pembroke Hospital is not required to respond.

And staff continue to be attacked.

How and why is this possible?

More recently, the Ledger reported that over the March 4th weekend a nurse at this psych facility was assaulted by a patient, nearly tearing off an ear and almost gouging an eye.

I cannot fathom how or why this is happening.

As a nurse with more 30 years behind me, imagining that the general consensus is it’s okay to assault us is astonishing.

And worse: How do administrators regard the medical staff? Have we become so disposable that our well-being doesn’t matter?

My name is Jamie Ross, and Sheila Wilson of Stop Healthcare Violence has allowed me to script this guest blog entry.

Over the past months I’ve been fortunate enough to collaborate with Sheila on a major redesign of her website, stophealthcareviolence.org.

As I embarked on this recent website overhaul, immersing myself in copious data, I was struck (pardon the unintentional pun) by an alarming notion: the severity and frequency of assaults on healthworkers may, indeed, have reached rampant proportions.

Having worked with Sheila since the ’09 inception of Stop Healthcare Violence, I’d already understood healthcare assault to be a serious issue in vital need of scrutiny and repair.

Yet this recent venture made me perceive how critical it’s become.

Follow up to Psychiatric Nurses are more than Angels

Pembroke Hospital is a 120-bed psychiatric facility; a healthcare venue that assists people with mental illness, and a place that should be safe, understanding, compassionate and helpful to all who need to be there.

Sadly, it appears that this is not the case.

On the contrary, Pembroke Hospital has been cited for failed standards for patient safety, according to the Patriot Ledger of Quincy, Massachusetts.  The facility has received a Hazard Alert letter from OSHA that they have ignored for 5-6 months, which “flagged the number of workers injured by violent patients and called for improved staffing and safety measures," again according to the Patriot Ledger.

Much is being said about the failures of this hospital, yet nothing is being done about it.

If the medical staff doesn’t have the right tools to work with, what are they to do? In this 120-bed facility there is only one code cart. Why aren’t there code carts on each floor or section?

I recently had the opportunity to visit a patient at Pembroke Hospital. This is what transpired:

I have a confession to make.

I am aggravated, frustrated, stymied… and even a little discouraged.

This bill would strengthen the penalty for assault on healthcare workers by changing it from a simple misdemeanor to a felony charge; just as it already is in thirty-two other states.

I have met with Massachusetts representative Bruce Ayers and his legislative director Sean Costello on numerous occasions; spoken to Senator Will Brownsberger and his policy advisor Anne Johnson Landry; testified in front of the Massachusetts Judiciary Committee; and worked with my friends and colleagues in contacting their legislators to urge support for this bill.

So it’s not as if the Massachusetts Legislature isn’t aware of my tireless support for HB #1164.

It's not as if this bill has not been on the radar for 13+ months.

Yet my emails and telephone calls to them inquiring about the status, save one staffer who had no information, go unanswered with deafening silence.

Psychiatric Nurses are more than Angels

This weekend's edition of the Patriot Ledger posted an article on hospital staffing at Pembroke hospital.

The article described how OSHA had issued a hazard-alert letter to Pembroke Hospital, a for-profit, 120-bed psychiatric facility, in October 2015 after it conducted a surprise inspection FOUR MONTHS prior in May 2015.

According to the Patriot Ledger of Quincy, MA, the hazard-alert cited:

"almost all interviewed employees had been struck by a patient”

"Workers do not have any panic buttons … to call for immediate help. Sometimes patients attack from behind and on acute floors, the mirrors have been taken down for patient safety”.

Wait, did I read that correctly? That staffers in a high-risk environment are not even armed with panic buttons?

I wonder: would Pembroke Hospital administration indicate in any job description that as a worker one could expect to be assaulted?